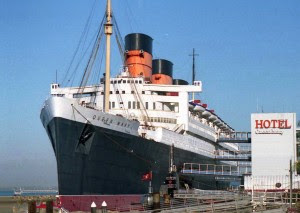 Several years ago I went to a training event in Long Beach, California and was housed aboard the former luxury cruise ship The Queen Mary, now a floating hotel. This ship has a history of hauntings including phantom swimmers and wet footprints beside a long-drained swimming pool, a ghostly woman who roams the ship, the sounds of screams and scraping metal, and the occasional sighting of a man who was once crushed by a watertight door.
Now I've got a little tale of my own to add to the mythos. 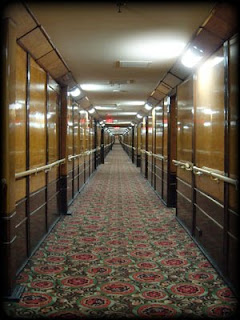 First, let me tell you a bit about the ship.
Most people are surprised to learn that the Queen Mary is much larger than the Titanic! She's so big that when you look down her corridors, you can see how the deck is curved downward from bow to midship and back up again to the stern.
She has several restaurants and bars onboard, and hosts a massive Sunday Brunch in the grand ballroom that I believe is touted as the single largest room ever built inside a ship. (Been there, in the dark and creepiness, and trust me, it’s huge!)
There's also a small shopping mall, a large museum below decks, and a "Ghost Ship" tour that takes groups to some of the haunted locations and recreates spectral visits with special effects.
The ship even hosts one of the largest Halloween bashes of ghost tours, mazes and all night parties in Long Beach called The Shipwreck--15 Nights of Terror.
So...did we have anything creepy happen while on the ship?  Actually....yes!
While exploring the decks one evening, David and I got onto one of the many elevators and pressed the button for one of the upper decks. The door closed but instead of going up, the elevator went down. :O
David tried pushing buttons to stop it, but it continued to carry us down, down, down, deck after deck. When the doors finally opened, we were seriously spooked, and in an unfamiliar place--a very dark, cavernous room. We stepped off, looked around, stumbled through the black toward a light. There were large glass cases with memorabilia, nautical pictures on the wall. Our wayward elevator had carried us down into the belly of the ship, and we were in the museum!
Except the museum had closed hours before. We were the only living souls there (though I can't say we were the only souls).
We wandered around looking for a guard, an exit, an escape…anything! The exits were all gated or locked. We yelled. No response. Tried to tap a code on the bulkhead. Nothing. At last we had to admit the obvious...there was no way out except back up the dysfunctional (?) elevator. But neither of us were keen to get back on. What if we got marooned inside the obviously possessed contraption?
We eventually found to courage to step back aboard and held our breaths as it carried us to the upper decks. We found our way to our cabin with no more interference from mischievous spirits, but our fellow conference attendees were so intrigued by our story of the runaway elevator that they scheduled an impromptu—and self-guided—ghost tour of the Queen Mary to be held after dark the next night.
Trust me, there is nothing like wandering around a really vast, reportedly haunted vessel in the pitch black (especially in places we really weren’t supposed to be, according to the cordial security guard who was quite amused by the merry band of camera-toting spirit seekers he confronted).
We scouted decks, corridors, massive halls and deserted staff areas for hours in search of…something. Something we were sure was going to be around the next turn in the hall or empty room.
But nothing ever…materialized.
Still, I can honestly say that—aside from one possessed elevator—I think we did come away with a gentle contact from the spirit world.
On our last night there, I was startled from sleep by the sound of my suitcase buckles rattling and shopping bags rustling in the next room. I woke David, my heart pounding, and we both prepared ourselves to confront a burglar…but when we went to the room and turned on the lights, there was no one there. Our cabin door was still locked from the inside and nothing had been taken. It seemed our mysterious visitor who had been rustling about in my suitcase had exited right through the closed door. Or maybe the walls.
And that, in a nutshell, is the slightly creepy tale of my stay on The Queen Mary.
_________________________________________________
After conjuring up this tale, I decided to check back in with the haunted ship some 18 years later. I was saddened to learn that in the years since we visited, the ship has fallen into disrepair and was even declared in danger of capsizing!
Apparently, after her forced closure due to the catastrophic pandemic shutdowns in 2020, regular maintenance and repair work for the already aging vessel suffered or ceased and her problems began to compound. She's leaking, for one. And her lifeboats were causing stress to her structure. They've since all been removed and stored in a nearby warehouse. At one point, there was even talk that the Queen Mary should just be sunk!
In February of 2022, $5 million was set aside to try to address some of her repair needs, however by some estimates she may need as much as $23 million for immediate repairs, and a total of $289 million for complete renovation and upgrades before she could be re-opened.
With the state of California in dire straights, it's difficult to know how much will be available to dedicate to the grand old girl to get her back ship-shape.
Hopefully this majestic and historic vessel won't end up going to her watery grave.
Have a wonderful Halloween...and a great week.

Email ThisBlogThis!Share to TwitterShare to FacebookShare to Pinterest
Labels: Halloween, Laurie A. Green, Return to the Queen Mary