The definition of slipstream fiction has evolved since the term was coined. In current usage, it commonly refers to “novels not categorized as strictly under science fiction, fantasy, or horror,” but some combination. In relation to space opera, space opera romance, and science fiction romance, it encompasses a growing group of novels that reside at the intersection of science fiction and fantasy or the paranormal: shaping shifting aliens, vampires from the stars, and other paranormal creatures.

But what of the grayish areas? Veronica Scott’s Danger in the Stars features an empathic heroine who is not human. Is it fantasy or an acceptable projection of an alternate evolutionary path? Does a character with paranormal abilities make Danger in the Stars any less science fiction than the winged aliens in Lea Kirk’s Silverstar Intergalactic Dating Agency novels or the telepathic bond that forms between mates in Tasha Black’s Stargazer Alien Barbarian Brides?

Then there is the flip side of slipstream, where paranormal fiction intersects science and science fiction. Rebecca Zanetti’s paranormal Dark Protector series explains the vampires’ ability to teleport and perform other ‘magic’ through advanced genetics and physics.

With so much potential for creative storytelling available within the classic boundaries of science fiction and paranormal fiction, why the merging? What is the appeal of the genre mash-ups? Veronica Scott likes to include a touch of the inexplicable in her stories since science cannot explain everything. It is a sentiment I share. My space opera romance series The Twelve Systems Chronicles, includes elements of what may or may not be divine intervention.

Conversely, even in the most fantastic of magic-driven stories, there is a desire to ground it in the known; to recognize physics, chemistry, and biology. My newest release, Elemental Fire, is an urban fantasy, but I could not resist speculating on science, and science fiction. 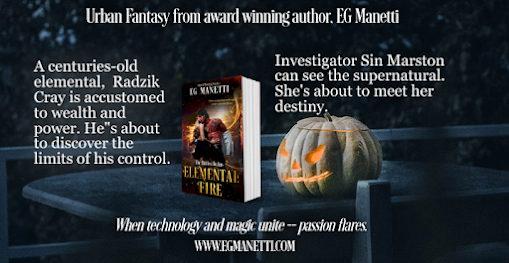 Sin Marston is a rare human who can see through glamor. With the veil with the treaty of 2010, the magical visitors, known as the Hidden, flowed into the Terran realm. With her unique talent, Sin's services are in demand from businesses and law enforcement with Hidden problems. She also has a growing clientele of Hidden visitors wishing to avoid confrontation with the Human Protection Society and other anti-Hidden Terrans.

After thwarting a daring art heist, Sin encounters a stunning fire elemental who reveals the theft was something very different. Everything she thought she knew changes.

Radzik Cray has lived for centuries, building his magical and political power base. The appointment as the Elders’ Council Warden for the Eastern United States comes with untold wealth and power, as well as untold danger. When he meets Sin Marston, he is interested in a pleasant distraction. Instead, he discovers that Sin is not all she appears and his control over his territory is not as absolute as he thought.

My fingers laced with Rad’s, I take in the starlit night. “Space travel. Are there Hidden on the moon? Mars? Is there a magical version of faster than light speed?”

Rad’s laugh is a deep, rich rumble that sends shivers down my spine. “There is no magical passage through the void of space. As I understand the theory of spacetime, it is not so much a matter of faster-than-light engines, but a mechanism to bridge between two points long enough for the transit. I know of no Hidden magic with such capability. Although, it is possible some undiscovered realm has the ability.”

“How is the void of space different from the veil? I don’t breathe when we pass through.” We turn off the riverwalk toward his building. “What do you mean, ‘undiscovered realms’?”

Rad’s step slows, his expression suggesting he is searching for words. “Are you familiar with the multiverse theory?”

“Parallel planes of existence coexisting side by side?”

“Think of those planes as not parallel so much, but as beads suspended in liquid. The liquid is the veil. Some of the beads are quite close, and transit is a simple jump. A dozen are close enough to Terra for the Hidden to cross. Beyond those, there is another score of realms within control of the Elders’ Council. A dozen more that will not join and do not permit passage into their realms. What lies beyond those realms is unknown.”

“So, there’s truth to the multiverse concept, but it’s not exactly as science fiction portrays it?”

He swings my hand as we start walking. “Because Terra has so little ambient magic, you have developed your science to compensate. When physics becomes far enough advanced, it may well match magic in its capabilities.”

“Any sufficiently advanced technology is indistinguishable from magic.”

He chuckles. “I like that. One of your scientists?”

“Science fiction writer. Arthur C. Clarke. You are so watching Star Trek Voyager with me this weekend.”

“Three episodes. If you hate it, we’ll do something else.”

His sexy half smile emerges. “I will plan to hate it.”