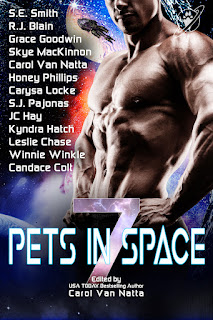 Pets in Space is back for the seventh straight year and it's better than ever! Featuring 13 original, never-before-released stories from some of today's bestselling science fiction romance authors, starring your favorite sci-fi pets. These furry, feathered, and slightly alien friends are always ready for a new adventure with their two-legged human and alien companions. From dogs to cats to sea creatures and unicorns, these romantic tales show that pets are more than just animals – they’re family.

The Pets in Space® 7 authors continue their vital support of Hero-Dogs.org, the non-profit charity that improves quality of life for veterans of the U.S. military and first-responders with disabilities.

Exclusively in Pets in Space® 7:

◆“Wynter and the Stone Dragon” by S.E. Smith:
Love blossoms between a human king and an alien princess when a portal between their worlds opens.
◆“Life-Debt” by R.J. Blain:
Hybrid human Viva and her pet fox have two rules: no names and no attachments. Why does the handsome man she rescued makes her want to break both?
◆“Marked Mate” by Grace Goodwin:
An elite hunter pursues a dangerous criminal on an unsuspecting Earth, only to be distracted by a mysterious woman and her furry pet.
◆“Alien Abduction for Unicorns” by Skye MacKinnon:
Unicorns are real, and alien Bruin is sexy as the stars. Can Scottish tour guide Tara forgive them for kidnapping her in the name of science?
◆“An Entanglement of Griffins” by Carol Van Natta:
A space pirate and a pet sanctuary owner suspected of grand larceny get help from genetically-engineered griffins to recover the goods and find love.
◆“Cyborg Rider” by Honey Phillips:
Can a bioengineered mole named Eglantine find a way to rescue the scientist and the cyborg who are depending on her?
◆“Healer Heart” by Carysa Locke:
A telekinetic healer on a mission and a telepathic killer who is afraid to feel must trust an intelligent cat to help them save a group of children from death.
◆“Myra’s Big Mistake” by S. J. Pajonas:
She’s burdened by a lifetime of disappointment. He’s been her secret admirer for years. Will a roll of the dice lead to a cosmic courtship?
◆“Desert Flame” by JC Hay:
Dr. Cerridwen Lewis is prickly, foul mouthed, and quick to anger; in other words, she’s everything Captain Kal and his pet scythewing ever wanted.
◆“Death Angel” by Kyndra Hatch:
How do you choose between your people and your mate? Especially when you're a Korthan cyborg captain and your human mate unknowingly holds the key to lasting peace or unending war?
◆“Written in the Stars” by Leslie Chase:
Megan isn’t looking for love, especially not from an alien mercenary just passing through. But love, and her winged cat Nebula, have other plans.
◆“Liquid Courage” by Winnie Winkle:
Powerful sea witch Morgan is determined to save her beloved ocean creatures from thieving aliens. Tony offers to help, but he's got secrets.
◆“Rhea’s Conundrum: A Witch in Space” by Candace Colt:
Eccentric witch Rhea only dreamed of the stars. So how did she and her snarky cat end up in a junk-picker spaceship with sexy alien captain C'tloc?

As with the previous editions, PETS IN SPACE® 7 has a LIMITED RUN!

Don't miss out — grab the anthology before it's too late!

Get your PETS IN SPACE® 7 at these retailers: