I'll admit I haven't done much in the way of writing for some time. I'm afraid that muse I don't believe in has pouted and gone somewhere else. Maybe she'll be back some time and I might yet finish the story I half finished. Or have another go at the one which pokes me in the ribs from time to time.

As a matter of fact, while playing with the art AI, Midjourney, I've several times been tempted to use some of the scenes in my books as prompts to get the AI creating. I talked a bit about that last week. This week, I had a go at creating a picture of one of the scenes in my short story, Ink. To do that, I stated reading the novella and didn't stop until I'd finished it. I think it's one of the best things I've written.

So, here's an early scene…

"He walked beside Razza along the gently sloping path leading through a meadow of grasses and wild flowers down to the lake. Four fishing boats drifted at anchor, their shapes mirrored in the dark water. Beyond the lake the mountains rose into an azure sky. For once, the snow-covered peaks were not burdened with the usual expanse of cloud. Golden-leafed forest edged the far side of the lake. Higher up, evergreens covered the lower slopes, and above them, the sun glinted off dark cliffs too steep to hold the snow."

Here's what the AI came up with (with a little bit of help from Photoshop to add the boats). 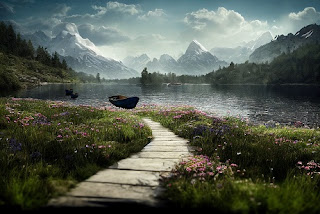 Then I thought I'd see what the AI could come up with to give me an image of Admiral Ashkar Ravindra. As with most things, many iterations are often needed to get a result. The eyes were a Photoshop addition. Even without the strange eyes, I was very happy with this one. It was better than anything I've found on any of the stock image sites. 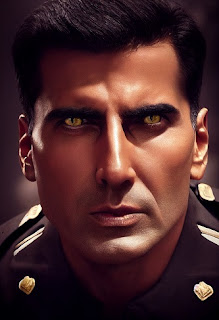 Ink is a story about how Ravindra got his famous tattoo. Maybe some time I'll see if I can create a picture of that tattoo, but at least I could find a reasonably acceptable alternative on a stock image site. 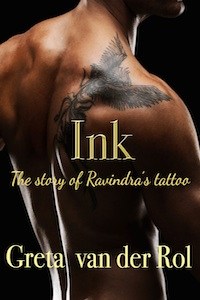 Some rites of passage should be remembered…

Life’s good for 18-year-old Ashkar Ravindra. School’s over, and he’s been accepted into the Fleet Academy. There’s time for one last trip up into the mountains in the brand new flitter his father gave him as a graduation present, before his real life, the one he’s been groomed for from the day he was born, begins in earnest.

Up in the mountains not everyone is pleased to see the privileged admiral’s son. Jealousy and ulterior motives turn the pleasant hunting trip into an ordeal. Lives are a stake. If Ashkar makes the wrong decision, he will be the first to die.

Buy the book at Your choice of vendor