The people on the book covers

One of the biggest problems I have in writing science fiction – especially romantic science fiction – is not so much creating the characters in my mind as realising them as images to put on a book cover. It's easy enough if your leading man is a youngish white human or a cyborg with a six pack and abs. The stock photo sites have plenty of those, and they're getting better for people of colour. But I've always found it difficult.

I always imagined Admiral Saahren, who stars in the Iron Admiral books, as dark-skinned. He's not a kid, either, more a man around forty and while he's got an athletic body, rippling abs is not what he's about. I wanted him wearing a military uniform. Try asking for that on a stock image site and you'll get lots of Russians in camouflage gear, not the look I was after.

Having had some success with Ashkar Ravindra (as shown last week) I decided to see how I'd go in MidJourney, visualising this man I knew so well in my mind.

This is Allysha's description of him.

"He certainly stood out from the herd. Not handsome; Sean was handsome. This man was lean and hard, close to two meters tall. He wasn’t young, a bit older than Sean she’d guess and his eyes; his eyes were like obsidian. She was frightened for a moment, seeing the cold fury in his face after he’d felled that creep but it wasn’t directed at her. He’d been gentle and sympathetic. So different from the rest of the men here. She’d checked the Confederacy ID chip in his head behind his left ear as they walked. Single, no dependents. Divorced, perhaps? But wouldn’t the ID have said?" 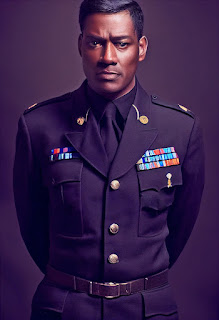 Women are a little easier. More and more, we're finding images of tough women and I was able to find reasonable photos for the covers of my Morgan's Misfits series.Though I know I'd have trouble finding an image of a woman in an admiral's uniform.

Even so, finding suitable photos required hours of trawling through images to find an approximation of what I was after.

I turned to Midjourney to work on Allysha, an attractive woman in her thirties with unusual green eyes and a serious disposition.

Here's Saahren's first impression of her:

"Saahren looked past him, at the woman. He’d never seen eyes like that. The bright green of new leaves shaded to a dark green pupil. It was almost as though the colors blended together, instead of that stark definition between pupil and iris. Her skin was the color of cream and the dark, slightly wavy hair that hung around her shoulders held a hint of red. No slatternly serving girl, this one. Slim and lovely, dressed in simple pants and a shirt. The expression on her face was unreadable.

"Mister Ludovic. Don’t let me hold you up."

Ignoring the hand, she stepped past him, flashed a glance up at Saahren that sent his heart hammering and slipped out the door.

"Phew. Haughty piece." Ludovic turned to stare after her. "Quite the ice maiden." His voice oozed sexual innuendo. "I wouldn’t mind melting her." He jiggled his hips in a thrusting motion.

"Who is she?" Saahren asked. He was staring, too. He’d met a lot of women in his day, women who threw themselves at him at official receptions but not one like this. She had an accent, one he didn’t recognize.

"Oh, she’s not on the menu. More’s the pity. She’s an expert on information systems, here to do some work for van Tongeren. Integrating the systems. Hard to believe somebody so good-looking would have brains. Except for those creepy eyes. Still, you wouldn’t see ‘em in the dark, would you?"

Those eyes. They were beautiful. She was beautiful. If she threw herself at him, he might even consider catching her, something he hadn’t done for many, many years. But somehow, he didn’t think she was the type to throw herself at anybody. 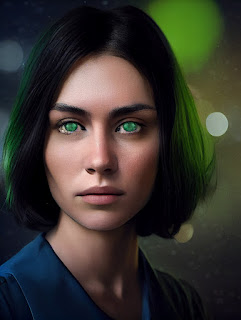 I'm very happy with both these images. Midjourney is a seriously useful tool. I'll have to have a go at a Ptorix next. That will be challenging.

FREE ebook at your choice of vendors