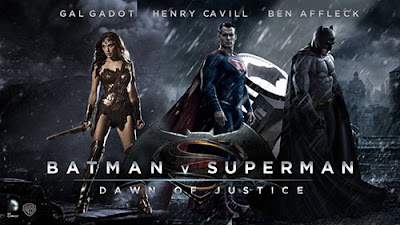 What can I say about the comic book clash of Titans mash-up that is BATMAN V. SUPERMAN: DAWN OF JUSTICE? The movie, currently playing at your neighborhood multiplex, is nothing if not ambitious, wanting to say IMPORTANT STUFF about how society sets up idols, then tears them down, about the nature of power, even, golly gee, about man vs. God.

But this film’s reach far exceeds its grasp. The plot makes little sense; the characters don’t fit the molds we’ve come to know over many years of familiarity with them; scenes are added that don’t seem to fit the story line simply because the director (Zach Snyder, of THE 300 and MAN OF STEEL fame) is trying to make a thematic point; humor is conspicuously absent; and the action drags.

Most of this is Snyder’s fault. If you’ve seen MAN OF STEEL, you will recognize the revisionist view of Superman here and Snyder’s Superman-as-Christ-figure symbolism. It gets worse in this film. Much worse. As for Batman, it's difficult to imagine a darker and more bitter Dark Knight than Christian Bale’s, but this would be it. This Batman seems to have no redeeming social value at all.

Which, of course, is supposedly what sparks the whole Bat vs. Supe tiff in the first place. Batman (Ben Affleck, not up to the task) seems to have gone off the deep end, beefing up to an inhuman level, torturing and branding his captured criminals. Straight-arrow Clark Kent (Henry Cavill, square-jawed and wooden as always) thinks this is not in the best interests of the citizens of Gotham. On the other side, Bruce Wayne is appalled at the destruction of Metropolis in the fight between Superman and his pals from Krypton, General Zod and crew. The man behind the Bat feels it’s only a matter of time before this supposedly benign being with the superpowers turns evil and uses them to destroy humanity. Thus Superman must be destroyed in a preemptive strike.

Enter the obviously nutty Lex Luthor (an interesting interpretation from Jesse Eisenberg), who has found a way not only to weaponize a hunk of Kryptonite found at the bottom of the sea, but to reactivate Zod’s crashed ship. He ups the ante between these two ostensible enemies, and we’re off to the races. Of course, that’s not all the crazy-bad stuff Luthor gets up to, but why spoil what little fun there is in this film for you?

I went to this movie because I wanted to know how anyone could plausibly pit two of the biggest heroes of the DC universe against each other and sustain it for a whole film. The answer is they couldn’t. You know how you’re told in Lesson One of Romance Writing that the conflict between lovers can’t be the kind of thing that could be resolved by a mere conversation? And if it is so fundamental that it can’t be resolved that way in the beginning, it shouldn’t be resolved that way in the end? Uh, yeah.

The initial premise of BATMAN V. SUPERMAN is weak. Then we’re told over and over that these guys have so much in common (which, of course, they do). Then the resolution is too easy. And don’t even get me started on Zach Snyder’s version of Lois Lane (Amy Adams), who continues to do stupid things only to be rescued by Superman. At least Wonder Woman (Gal Gadot), who for reasons of establishing the new Justice League franchise, shows up in the final ass-kicking scenes, is capable of taking care of herself.

There was yet another reason I left the theater shaking my head at the end of this film, which I won’t reveal for fear of spoiling it for anyone still willing to pay good money to see it. I’ve left some hints in this review already. Let’s just say it’s another example of audience manipulation in hopes of generating a push for the next film. I’ll be skipping that one, thank you. I’ve had enough.