So what can I tell you about the week-long cocktail party and schmooz-fest that was RT2016? You’ve already seen Laurie’s gleanings from the Twitterfeed, which gave you a good sense of the fun atmosphere. And, of course, this year’s RT Booklovers Convention was in Vegas, baby, where the neon lights and throbbing dance music go on 24/7. 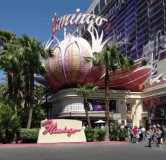 The idea of RT is to bring readers and their beloved romance writers together in as many creative ways as possible, so there are lots of “meet and greet” panels, soirees and activities to make that happen, many of them involving cover models or games and prizes or other goodies. I took advantage of one of these to meet one of my long-time idols, author Christine Feehan, creator of the pioneering Carpathian vampire series which began with Dark Prince back in the 90s. In fact, I inadvertently jumped a long line waiting to get in for the panel and found her in an empty room. Embarrassing, but AWESOME! She was very gracious and approachable.

Speaking of which, Nalini Singh, author of several series which straddle the line between paranormal romance and SFR, including the bestselling Psy-Changling series, was indeed seen everywhere going out of her way to be friendly, open and accommodating to her many fans. By now, SFR Brigader Sabine Priestley’s pic of herself and Nalini lying in the gigantic “Fall Into Nalini Singh’s World” promo circle in the convention lobby must have gone viral!

Science fiction romance has a stubborn, but limited presence at RT, a convention that is increasingly dominated by the popular subgenres of New Adult, contemporary and erotica. This year we had two panels: Sci Fi Heroes and Why We Love Them, moderated by author and USA Today/HEA blogger Veronica Scott, and The Dangerous, The Devious and The Irresistible: Villains in SFR, moderated by author and genre mentor Linnea Sinclair. I was honored to serve on the Villains panel, with fellow authors M.D.(Misty) Waters, Isabo Kelly, Colby Hodge and Janet Miller (aka Crickett Starr).

Both panels filled their respective rooms, and the discussions were lively among both panelists and audience members. Readers came up to panelists after our talks to meet us, get signed copies of books and other giveaways, and express their interest in our work and SFR in general.

Of course, the biggest SFR event at RT is always Linnea Sinclair’s Intergalactic Bar and Grille Party, the only real sanctioned gathering for readers, fans and writers of SFR at the convention. I was promoted this year to Commander (of a table of 10 readers—my crew). We competed against the other 24 crews for prizes in the crazy games and competitions of Linnea’s evil invention. Lots of fun and swag for all the 250 fans in attendance.

I should mention that Romance Writers of America® Fantasy, Futuristic and Paranormal Chapter members attending RT managed to take time out of an insane schedule to get together. For those of you who are not RWA® members, SFR is included under the FF&P umbrella within that organization.

As always, rumors circulated throughout the con that SFR is the NEXT BIG THING. Nalini Singh was heard saying this, as were a few agents and publishers. But I wouldn’t get your hopes up.

My agent confided that a certain well-established small publisher is looking for SFR, but NOT humans in space. They want shape-shifters in space. If you have a manuscript with a werewolf tribe on a starship, it has suddenly become a hot property. Contact me and I’ll let you know who is looking for it.

Smashwords came out with the results of a survey they conducted at the convention that indicated a big interest in the subgenre of SFR of among readers. (Thanks, Sharon Lynn Fisher, for posting this on the SFR Brigade page.) The only problem there was that the interest was expressed as a subset of YA and NA. SFR has always been considered a good sell to teenagers and young adults. Look at the popularity of such series as The Hunger Games and Divergent. But the Powers That Be have never considered it sellable beyond that audience.

If you’re writing SFR for the YA/NA audience, you may be on the cutting edge. Certainly skewing young is the one clear message I got from this con. RT has always had a younger demographic than RWA, but this year the difference was even more dramatic, with so many of the writers aged 25-35.

One thing my agent says we in SFR should learn from these younger writers is how to support and promote each other. For the most part, they are writing NA, contemporary and erotica, subgenres which are hot, but also quite competitive. And yet they are not afraid to cross-promote each other. They review each other’s books, actively participate on promo sites and so on. I’m still trying to learn how what they’re doing differs from what we’re doing, but it’s clear they must be doing something right.

I met one of these young writers, a funny, unpretentious guy with a fascinating background and thousands of fans. He’s at that level of popularity that his readers send him gifts—lots of gifts. Every day the mail carrier arrives with something else from his adoring fans. It’s driving him crazy. I guess I don’t have to tell you he doesn’t write SFR. The only thing my mail carrier brings me is the electric bill and the L.L. Bean catalog.

But at least I get to go to RT every year and meet interesting people. Writing does have its perks.

*Thanks to Kyndra Hatch for group photos!