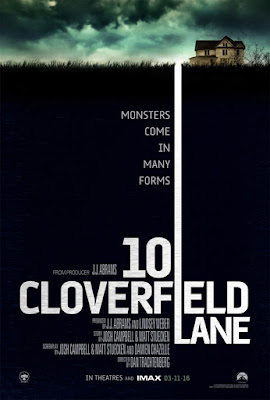 J.J. Abrams has a way of blending a modern movie-making sensibility with a true respect for the pioneers of old-school television and film SF. His latest offering as a film producer, 10 CLOVERFIELD LANE, is a great example of this, bringing to mind classic TWILIGHT ZONE paranoia and chock-full of geeky referents.

If you saw CLOVERFIELD, the first film in this “anthology,” you may be tempted to skip 10 CLOVERFIELD LANE. That film was done in the handheld-camera, “found-film” style of THE BLAIR WITCH, and gave us little more than some murky footage of dumb young people running and hiding and being ripped apart by some big, undefined thing. Maybe an alien? Who knows?

But here the setup is completely different. A young woman (Mary Elizabeth Winstead) is run off a dark, country road in a stunning accident and wakes up chained in what looks like an empty basement room. Her captor is a survivalist (John Goodman) who says he’s saved her, not only from the scene of the accident, but from a horrible disaster unfolding outside his underground shelter. “Maybe nuclear, maybe biological, I’m not sure,” he says.

Okay, clearly crazy, the young woman, Michelle, thinks, but there is another inhabitant of the shelter, a young man named Emmett (John Gallagher, Jr.), who backs up the man’s crazy talk. Emmett believes Howard is a kind of genius because he’s been preparing for just this kind of moment. When Emmett saw the weird red light flare up in the sky, he headed for the shelter he’d helped Howard build and fought his way in.

Through the window in what passes for an airlock, Howard shows Michelle the two dead pigs in his yard, evidence, he says, of some kind of contamination in the air outside. He shows her the radio, functional and kept on, but stubbornly silent. Still, despite the desperate attempt of an “infected” woman to breach the shelter, Michelle is not entirely convinced. She plots her escape.

Because, you see, Howard really is crazy, one minute dancing to the tunes of an old juke box, the next in a rage at the flirty behavior of Emmett and Michelle. He’s volatile, violent, and quite probably a murderer. Michelle has discovered evidence of this in her poking around the shelter and refuses to stick around and become his next victim. She enlists Emmett in a plan to construct a biohazard suit, steal Howard’s gun and go out the airlock.

I don’t want to spoil the fun of this tense, well-acted thriller by giving away what happens next. Let’s just say things don’t go exactly according to plan, and, even better, Howard isn’t wrong about everything.

Newbie director Dan Trachtenberg and his excellent cast of actors do a great job of maintaining a high level of tension throughout this film. And the last few minutes of 10 CLOVERFIELD LANE leave you wanting to pump your fist in the air. How often do you see a movie that gives you that kind of feeling these days?

RT IN LAS VEGAS NEXT WEEK! 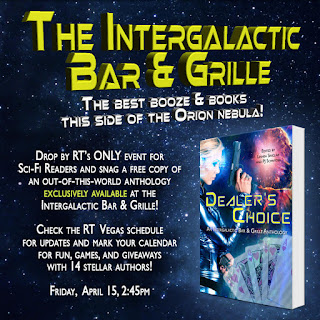 I won’t be posting next Friday. I’ll be in Vegas, baby, at the Romantic Times Booklovers Convention! I’ll be talking about villains, er, protagonists with Linnea Sinclair and a number of other bright-star SFR authors on The Dangerous, The Devious and The Irresistible panel at 10:00 a.m. Thursday, April 14. And I’m a table Commander at Linnea’s Intergalactic Bar and Grille Party on Friday, April 15 at 2:45 p.m. Woohoo!

If you will be at RT this year, check out the panel and be sure to join the fun at the IB&G—always a blast!  If you can’t be there, follow the fun on my Facebook page and Twitter. www.facebook.com/DonnaSFrelickAuthor and @DonnaSFrelick