...although not with my writing. I'm pleased to announce I've already 'won' Camp NaNoWriMo with edits on my 50K June project, and I'm now adding in some scenes suggested by my editor. Reunion is still untouched since it came back after a major revision, but that was deliberate.

No, the empty brain refers to blog posts. I started two others before getting to this one, and quit both after deciding they were just too BORING! Problem is, I haven't come up with anything else either.

So I'm going to share a scene from Reunion that may end up on the cutting room floor, then finish with a status and chook update. Enjoy!

The sea called to him. It hissed and whispered over the sound of Quin’s breathing, over his own heart beating a rhythm in his head. Moonlight clothed the hut’s interior in silver light, fiercely bright. He lay on his back and stared at the ghostly outlines of the furniture.
Quin slept curled in a huddle, her back to him. For a fleeting instant, he considered waking her, but decided against it. This was something he wanted to do alone.
He slipped from the bed and reclaimed his sarong, knotting it around his waist. The chill sea breeze stroked his skin, and he shivered at its touch. With a last glance at Quin, he pushed aside the canvas covering of the hut door and stepped outside.
The beach lay empty, a dark, glistening ribbon scattered with weed and shells abandoned by the withdrawing tide. Silver tipped the edges of the black waves beyond. No sounds came from any of the other huts, but a few lone lanterns glowed along the walkways joining them, and on the docks close to S’rano’s ship. The sea’s whisper rose above the rustling of the trees behind the village. The white disc of the moon glared down at him. He stared up at it for an instant, following the pattern of craters and scars on its surface. Metraxi’s single satellite looked lonely compared to the double moons he had known on Salusan.
His gaze returned to the sea. The waves beckoned him, teasing as they swept in and out. Just a few days earlier, he had given into their embrace and tried to drown himself. Could he step back into the water? Did he dare?
His heart raced, his mouth gone dry. The sea lapped at his toes, and he staggered back, the cold shock shooting through every nerve. It set him gasping, squeezed his throat as if he were drowning all over again. His knees shook.
I cannot go back into the water.

Status Update
A new shiny thing! Well, not for me exactly. I entered the cover for When Dark Falls into the EPIC Ariana Award Contest, and it won! Kudos to my artist Victoria Miller. Isn't it pretty?! (And as close as I've got to winning an EPIC other than being a finalist in 2015 for science fiction with Gethyon). 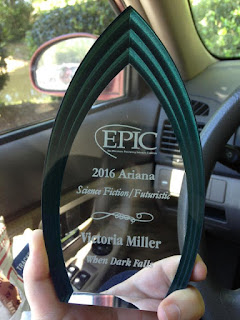 But wait! I did get a shiny. My Star Performer medal from the SFR Brigade, along with my Certificate of Appreciation arrived in a big box from the US (along with a secret project). I'd have dressed up for the occasion but I HATE taking selfies. Lol. Maybe I should have posted my speech? 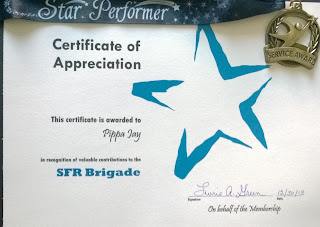 I've 'won' Camp NaNoWriMo with editing my June project, and I'm now adding in scenes suggested by my editor. Reunion awaits second round edits. Revived is ready for edits but I've no idea when I can afford to do that one, while my winter SFR (which I'm now convinced probably isn't a SFR but a SF mystery) still needs finishing. I've also been working on book three for Keir.

The Redemption series (Keir and Keir's Fall) finally got a series page on Amazon. Yay!

Chook Update
The new girls have finally settled in and we're getting eggs. Both Pitch and Spaghetti are definitely laying, but we're not sure if any of the others are. They're slacking!