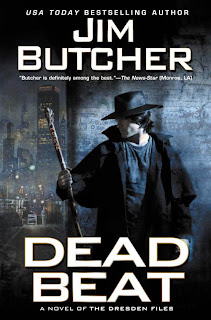 OPENING NOTES FROM THE REVIEWER: With one notable exception (Lisa Shearin), I don’t read a great deal of Fantasy, but if a book, or a series in this case, gets enough buzz, I figure it’s my duty as a writer to investigate. The extent of my understanding of Harry Dresden was that he’s a wizard. Needless to say, I jumped into this without much background or knowledge of the main character or his journey, and although there were frequent references to past events, I found it very effective as a stand alone novel. The front cover blurb for DEAD BEAT is: “A great series—fast-paced, vividly realized, and with a hero/narrator who’s excellent company.” I’m afraid I can’t agree with the “fast-paced” part of that, as I felt the plot at times moved at the speed of aggravation and the MC seemed to wander from place to place and gut-punch to gut-punch without much true direction. However, the “excellent company” part I can endorse, since the first person delivery was often witty, humorous and clever, if a bit self-defeatist at times. BUT…I am writing this review and I don’t review books I didn’t enjoy or that I found substandard. Nuff said. DEAD BEAT more than made the grade.

COVER ART: Superb! Introduces the MC, the atmosphere, and the setting in a stylish monochromatic Chicago-after-dark landscape that suggests an edgy, mysterious, dangerous read ahead. The image of Harry Dresden, his face in deep shadow under an Indiana Jones-ish black hat, dark cloak open to a rumpled gray t-shirt captured his character extremely well, IMHO.

INITIAL IMPRESSION: I can’t say I was hooked with the Harry-at-home beginning, but the first couple of chapters were written with enough skill that the story held my interest until things started getting “faster and furiouser.” A fellow writer and avid Dresden Files aficionado told me if I’d read the series, I might find the beginning much more interesting. Possibly so.

MAIN CHARACTERS: I liked Harry Dresden. He made a wonderfully flawed hero with extraordinary powers that he sometimes didn’t always have a lot of faith in, and at other times gave too much credence to. The half-brother was intriguing, and might have been moreso had I indulged in earlier books that most probably fleshed out his history. The majority of the other characters were either supernatural friends, foes, or strange little characters that seemed odd bedfellows for Harry (not in the literal sense, but more on that in the Supporting Characters and Romance sections).

SUPPORTING CHARACTERS: At times I found Butters annoying, as if he had been inserted as the comical sidekick who really wasn’t all that comical or amusing and seemed to constantly get Harry into a deeper mess. He did redeem himself later in the story, for the most part. I also won’t go into the cast of hundreds of supernatural critters and royalty that drifted in and out of Harry’s path throughout the book, the majority of them threatening protagonists even when they were showing a more friendly side, except for one. Shiela. Without venturing into spoiler territory, I genuinely liked this character and liked the prospects she offered for Harry. The twists involving Shiela I did not see coming—and I won’t tell you if they amounted to good or bad things for our favorite Illinois wizard, but I go into more detail in the Romance section below.

VILLAIN: Many. The list is long and distinguished, and most had darker powers than Harry. I won’t name them; you can discover them for yourself if this review piques your interest enough to pick up a copy.

WORLD BUILDING: I loved the explanation of the Fantasy world overlapping with the real world and some of the “facts” put forth to present this line of thought. Suspension of disbelief? Oh yes, big time. A lot of looking over my shoulder into dark alleys after reading this one? Yes, for weeks. This Chicago that exists in multiple planes was well drawn, and the author knows his territory.

CONFLICT: A classic good verses evil, except you can never be sure who is wearing what mask. The line between the sides is also blurred and the boundaries often pushed in one direction or another depending on the circumstances.

PLOT: The mundane pace soon gave way to a wild chase, deeper tension and greater threat…but OH! What an encore! Worth every moment for the buildup to a climax that is…(grins with conspiracy at those in the know)…truly HISTORIC! I’ve been to the Field Museum in Chicago so the big surprise at the end was an absolute delight. The images Jim Butcher painted in the final scenes were fascinating. Yes, I am intentionally being vague because I won’t spoil the clincher. The clues are there, intricately woven into the plot, where the trail will lead Harry and what solution he must employ to his advantage to defeat the bad guys. My hat’s off to the author for the grand finale. Made me think of the line from Independence Day: “I gotta get me one of these!”

ROMANCE: This isn’t a romance, but there was a small element there. Being a SciFiRom writer, I have to comment. I felt sorry for Harry as a guy who just didn’t get a break in his love life. Harry is driven into jeopardy to keep his love interest safe and alive, even though she’s off with another guy for a romantic getaway. Harry struggles a bit with his feelings when another female—the aforementioned Shiela—asks him on a date. The outcome. Well, you gotta feel for the guy. Like I said. He just doesn’t get a break. And I won’t go into more detail to avoid major spoilers, but I will say there is a surprise in store that does make you think. In fact, it goes out of its way to make you think via a spirited three-way debate. Even if it’s only in Harry’s mind.

GREAT LINES:
The fireplace was more of less the epicenter of the slopquake.
A shaggy section of the kitchen floor hauled itself to its feet and came to meet me...
I can disintegrate a virgin's inhibitions at fifty paces, but I can't last two weeks at a job where I'm wearing a stupid hairnet and a paper hat.
(All in Chapter One.)

READABILITY: Very readable, very satisfying, though I probably wouldn’t toss this one into the “must read again immediately” pile. Not necessarily the fault of the novel. Like I said, I’m not a huge Fantasy fan and this one would need more romance to make me dive in for another swim.

EVIL AUTHORS GUILD STAMP OF APPROVAL: The Evil Authors Guild exists to encourage writers to inflict appropriate amounts of terror, angst and torture into their characters’ lives, and to leave them twisting in the wind at every opportunity. OMG, yes. I do believe Jim Butcher wrote the club by-laws.

SECOND READ: Not applicable at this time.

OVERALL RATING: I don’t rate novels on a number scale. Each novel is unique and, just like sightseeing in a strange city, you learn about the literary ‘points of interest’ as you get to know the territory. Ok, another easy one. Chicago, of course! Chicago-at-Halloween, at that. The feel of the Windy City streets during a dark, damp, stormy fall makes you shiver and a trip to the historic Field Museum…and a tour of the town on a “souped-up ride” will give you goose bumps and a conclusion you will never, ever forget.
Posted by L. A. Green at 5:00 AM