Back To The Very Beginning #amediting

A long time ago in a blog post far, far away...

Well, the 14th of June 2011 to be precise. That was the day I did my first post at Spacefreighters as a guest, talking about the inspiration for my very first publication - a scifi short story called The Bones of the Sea. My *coughs* unofficial publishing debut, since it was very much an experiment in all respects and a self published piece. I formatted it myself using the Smashwords style guide, bought a stock image for the cover and added the text, then got a couple of friends to read it over for obvious mistakes, and launched it on Smashwords only as a freebie. The story has had a new cover since release, courtesy of the ever fabulous Danielle Fine, but it's never had an interior makeover. Until now.

I've decided the time has come for Bones to get a formal edit, a revamp, and perhaps to finally go up up on Amazon (yes, it's never been available there). I've almost five years of updated bio and links to add to it, and the plan is also to put it in the back of my June release as a bonus story (as they both feature the same planet) and thereby getting it into print as well (it's way too short to qualify for print on its own).
Bones is my shortest published work at just 3000 words. I haven't succeeded in writing that short since. But I'm also not writing as long either. In complete contrast to Bones, the revised Keir is 111K. Most recently my titles have been around the 10K mark for a short, or 30-50K for the longer pieces. I'm planning to get back to some really hefty novel-length word counts next year.
I'm hoping to have Bones redone by the end of the week ready to do the whole 'tell Amazon of a lower price' tango, since they're about the only retailer that won't just let you set a book at free. *rolls eyes*

Status Update
I won Camp NaNoWriMo well ahead of schedule but hung around to encourage my cabin-mates while adding to the June project having completed first round edits on it. The story got a whole new chapter, as well as additional material throughout. Bones will be added to the back for release.

I finally dared to crack open the third round edits on the original draft/first round edits on the revised content for Reunion. But I've only looked through the first, mostly unadjusted third. I haven't braved the revision section yet. In fact, at the moment I'm not sure I want to continue with it at all. One of the advantages of self publishing is that, if I don't feel a book is ready or working, I don't have to put it out. And right now that's how I'm feeling about Reunion. It's so far off where I would like it to be that I think it's broken beyond repair. So I'm going to focus on other things:
Bones and my Rebecca finalist Revived both went to my editor last week as she found herself ahead of schedule. So you may get the second Venus Ascendant story this year after all. No promises! I still don't have an official title for it yet, and frankly I don't know what I'm thinking. Four sets of edits on the go at once? Insane. 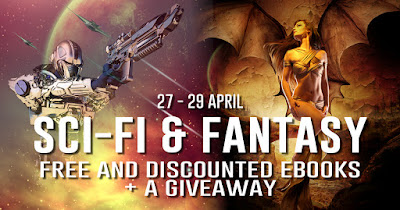 I'm part of a huge Scifi and Fantasy event starting tomorrow and running until the 29th, with 56 top SF, UF, and Fantasy titles going on sale, free or discounted. There's also a big giveaway - two Kindle Paperwhites, one US and one UK (UK contests are so rare I strongly recommend going for this!), plus Amazon giftcards. It'll be open to US and UK entries from the 27th. For the occasion, my urban fantasy/superhero romance novella When Dark Falls is part of the event, and is reduced to 99 cents/99 pence until the end of April. Superheroes for the win!

Next month I will be celebrating Keir's fourth book birthday and my fourth anniversary as a published author. It will also be my 23rd wedding anniversary. Together with seven other awesome SFR authors, we'll be holding the Blue Moon Blog Tour later in May for your entertainment! There'll be posts on the blue theme, and a rafflecopter giveaway including books and giftcards.

The Portals project is coming! If you stopped by to read Laurie's post yesterday, you'll know there's an exciting set of scifi romance volumes coming up - first chapters from a variety of authors in varying subgenres. Looking for love in an alternative world? Portals will take you there for free...