I’ve never been an A+B=C kind of writer. Even with the first book in my Interstellar Rescue series, Unchained Memory, I played with multiple timelines, points of view and subplots. In that book, those tricks of the writer’s trade were necessary to keep the reader guessing about the true nature of the heroine’s past and the future threat she and the hero faced to reach their HEA.

Playing with the reader’s preconceptions and making her question what was going on was something I’d learned from watching television classics like The Twilight Zone and The X-Files. But as I continued with the IR series, I found those tricks became signature elements of my style. Like I mentioned last week, making my characters question the foundation of their cozy existence is an essential part of what I do with my contemporary SFR. 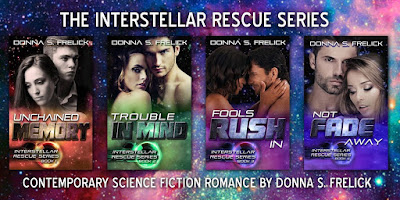 Of course, as I added titles to my series, the cast of characters got bigger, too. My universe expanded every time I wrote a new book, and, since I have fans who follow the series, sometimes they want to see old favorites make an appearance. Often, it’s not just for old times’ sake, either. Older characters may have ongoing roles to play in the universe I’ve created, so they keep showing up to do their jobs.

The challenge then becomes to limit these characters’ POVs, then to integrate the subplots they generate with the main external plot and the romantic arc between the hero and heroine in such a way that it’s not an unwieldy hodgepodge. No easy task (just ask the writers of the latest Avengers disaster, uh, movie).

Fun fact: characters change as they take on new roles in different books. And maybe they aren’t as nice as you’d like them to be. Rescue Agent Rayna Carver, the heroine of Fools Rush In, Interstellar Rescue Series Book 3, was never one to follow the rules. But in Not Fade Away, Interstellar Rescue Series Book 4, Rayna, has been promoted to Rescue's Chief of Field Operation. The stubborn hero of the book, "retired" Rescue Agent Rafe Gordon, finds out Rayna can be just as hard-headed in her new position as enforcer of the "regs.".

The look on Charlie’s face—hurt, betrayal—sent an arrow of pain straight through Rafe’s chest. Damn it, why couldn’t they have let him handle this his way?

He started after her. “Charlie!”

“Let her go.” Rayna grabbed his arm. “You know you’ve allowed that to get way out of hand, right?”

He snatched his arm out of her grip. “That is my personal life—and it’s my business. I didn’t mean for Charlie to get involved in it, but it’s not like I could predict when that assassin would show up. She handled it like a pro—she deserves to know what’s going on.”

“I don’t need to tell you why that’s a bad idea,” Rayna said, her expression grim. “Especially if you care for her.”

Anger flared in his chest. Anger—and guilt. He’d put Charlie in the crosshairs with him and Del. The safest thing for her would be to stay far away from them. But the thought of living without her stole the air from his lungs. He forced himself to breathe.

“Why are you here, Chief Murphy?” He had to resolve this once and for all. Rescue had ruined his day for the last time. “I’ve told you Del is not gonna be a snack for your Thrane brain eater.”

“You may say different once you hear what we’re really up against.” Rayna’s stubborn expression mirrored his own unwillingness to compromise.

“We’ve got plenty of trouble right here,” he said.

Rayna ignored that argument. “We think the Grays have tested their weapon—the one that was maturing at the T7 labor camp. Two days ago, a nonaligned planet in Sector Five was stripped of its power sources and working technology in a matter of minutes. When the Grays swept in to occupy the panicked world, the population had no defenses. People are being organized into slave labor battalions as we speak, to work factories, crystal mines and industrial farms.”

Rafe’s jaw clenched. “It’s not the first time the Grays have taken over an entire planet.”

“No. But it’s the first time they’ve done it without outside help,” Rayna countered. “No Thrane mercenaries. No troops of any kind. Intel says just the usual Ninoctin guards and mindwipe facilities.” She shook her head, and the face she turned up to him now was horrified. Desperate. “A whole planet, Rafe. Without a shot fired in resistance. Do you understand what I’m telling you?” 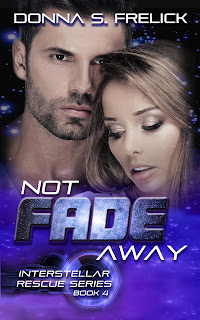 “But if the weapon has been unleashed, we’re too late,” he said, guilt warring with relief in his chest. “The thing, whatever it is, is fully mature and on the move. What good would it do to know where it was hatched?”

Rayna exhaled. “The Grays lost at least one of their escort ships when the weapon was used. Maybe as many as three of them. The Grays will have to go back home and regroup before they try it again.”

“You hope.” Rafe heard the weary sarcasm in his voice; he hated that sound of defeat.

Rayna met his gaze, fire in her dark eyes. “Yes. We all hope. Because if we don’t get there to stomp this thing to death while it’s down, we might as well all line up for the mindwipe. The Grays will have won not just the battle, but the whole freaking war.”

Not Fade Away, Interstellar Rescue Series Book 4, is available for pre-order NOW on Amazon!

Cheers, Donna
Posted by Donna S. Frelick at 7:05 AM